Takashi Amano’s new photobook, “THE LAST AMAZON (the book is in Japanese only)” will be published on July 2nd. The tropical forest in South America which Takashi Amano has been taking its image for 10 years. This photographic collection is a complete record of the unknown status of Amazon including major deforestation, environmental pollution, animals and plants at extinction crisis and send messages to the viewer to consider about the future of the earth and human kind.

Today, Amazon is disappearing from the earth. 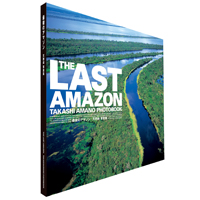 Humans are trying to expand the sphere of human habitation today, and there are no more places isolated from human influence on the earth. Amazon is no longer a primitive or undiscovered place. There are numbers of issues giving a severe impact to Amazon such as major deforestation, pollution caused by tourism, animals and plants at extinction crisis. What will be left in Amazon in future if the beautiful landscape continues to be damaged? This is the image of the disappearing Amazon taken in 10 years by the photographer.

About the Author: Paul